From flaming bulls to flamenco: our man-on-the-ground in Spain, Carlos Oppe, brings the magic of fiestas to life

Family holidays spent in the village of La Granja (Segovia) were long and magical, especially during fiesta time when the entire place exploded into a week of fireworks, music and dancing, long noisy processions of ‘Gigantes y Cabezudos’ (giants and bigheads) with the municipal band crashing along in tow.

As a 13-year-old it was exhilarating to dodge the bigheads whose desire it was to cosh unwitting children over the head with their swollen pigs’ bladders tied together with sticks and string.

From sunset onwards the main square rocked with fiesta bands belting out hits and popular songs and the villagers danced their socks off, or simply sat outside one of the many bars taking it all in, and of course, gossiping. At around midnight (Spanish timing) all the street lights were turned off and into the square bolted ‘Toro de Fuego’ – the fire bull. Imagine an effigy of a bull, its huge head erupting with fireworks, mounted on a bicycle and propelled by a man covered in black cloth – no wonder we all screamed and fled! It was as if the entire village had turned into a joyously insane playground.

Older and bolder (but no wiser) my brother and I decided to risk our necks running away from the real thing. We left our village at 5am to travel to the nearby town of Cuellar where the oldest recorded bull run takes place – a church document from 1215 prohibits priests from taking part. The miniscule bus fare included plentiful amounts of anisette and beer so we felt no fear as we donned our village scarves and took our positions on the street, hurling ourselves into the throng and din as the crowd ran from 6 large bulls, each weighing a ton and with their horns filed to points. Sheer survival kicked in as we rushed into the ring and scaled the walls to safety and then endless bravado-filled banter about how brilliant we were, and a lot more drinking of beer and anisette. 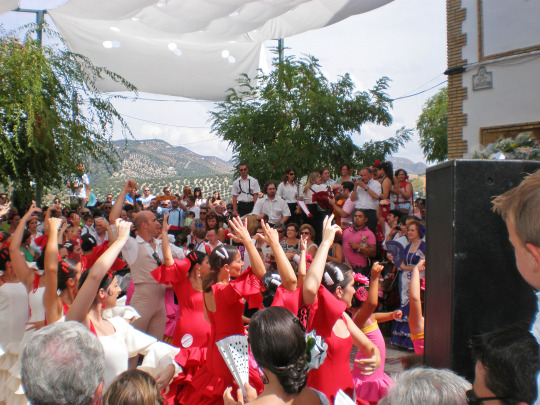 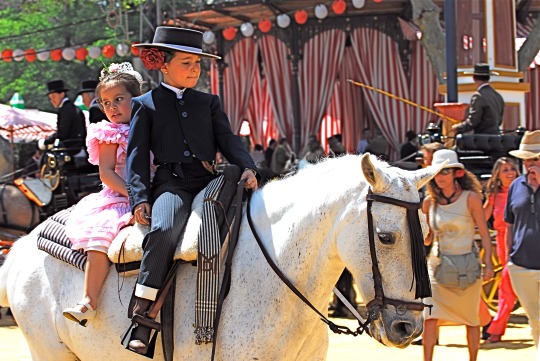 One of the reasons I choose to live in Spain is the strong connection here to tradition, enhanced by many local fiestas. In Fuenteheridos (Huelva) the local spring water is blessed by the small white-clothed virgin taken from the church while a troupe of flamenco singers pay homage to both and the village watches. In September, the “Romeria” takes place – villagers (steeped in ‘fino’) start early on horseback, or a cart, or walk to shrines on holy sites. Sumptuous picnics are prepared, the national anthem is played, and if you’re lucky spontaneous flamenco will break out.

The town of Aracena (Huelva) holds marvellous processions during the week leading up to Easter. At sunset on Good Friday, the statue of “Jesus on the Cross” is taken out of the church as the sun sets in the West and the full moon rises over the sierra to the East. Two long single files of the hooded members of the “Hermada”, wearing their ancient and striking costumes accompany the statue slowly down the castle ramp into the town holding tall lighted candle sticks. The municipal band plays solemn music and behind them march the local dignitaries: the priest, the mayor, the police chief, and lastly the villagers all in their Sunday best. Not a tourist in sight. Wonderful.

Carlos Oppe is the Sawday’s man-on-the-ground in Spain. Based in Madrid for the past 25 years, he ensures that no special Spanish places are missed from the Sawday’s collection. His favourite part of the job is “being on the road and meeting our fascinating members, who all have wonderful tales to tell. And of course discovering beautiful places”.

Find your perfect base to explore the festivals of Spain and Portugal in our Fiestas & Fados collection.

Exciting Easter escapes and inspiration from the team

Getting back in the saddle; Wendy Johnson on the joys of cycling slowly

Incurably curious, we seek out quirky, independent and authentic places to stay across Europe.